Documents wrote:If either Var or Value is an invalid timestamp or contains a year prior to 1601, Var will be made blank to indicate the problem.

If I launch the code

I get the error message instead of blank variable. 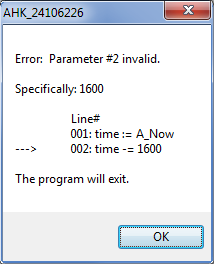 - EnvSub and its -= equivalent give you the difference between 2 dates, 1600 is a date outside the range, so should cause an error.
- Since you agree that it should cause an error, there doesn't appear to be a bug. Are you saying that AHK is wrong to show an error message, and that that is a 'bug'?
- (Whether errors should be silent or explicit is up for debate. AHK v2 is slightly stricter than AHK v1, and shows more error messages, which I think, on balance, is probably for the best.)

- Ah, actually, I see, it appears to be working contrary to what's stated in the documentation.
- The script below works in accordance with what the documentation says. A blank variable, no error message.
- So then this becomes a semantic dispute. While the script is running, AHK behaves as documented. But that bit of the documentation omits to say that if certain errors are spotted in the checking stage, the script will never run.

homepage | tutorials | wish list | fun threads | donate
WARNING: copy your posts/messages before hitting Submit as you may lose them due to CAPTCHA
Top

1. Why include something using DLL calls? That has nothing to do with this person's problem.
2. Your script, the second, does INDEED work as documented. But, that too is not the point.

3. It is not a "semantic dispute". Pure and simple

Either 1) It is a bug (which I believe it is) or 2) the documentation is incorrect.

The fact that your second script does work as documented and his does not indicates IT SHOULD BE CONSIDERED A BUG because the documentation says the 2 ways of subtracting time ARE the same: "Sets a variable to itself minus the given value (can also compare date-time values). Synonymous with: Var -= Value"
Top

- I provided the DllCall code for tests relating to edge cases.
- It is a semantic dispute, since you've just disputed it, and I think I know what the eventual outcome is going to be (I've been in this situation before). In fact, it's two semantic disputes, you're disputing whether this is in fact a dispute.
- There are grounds to say that the documentation could be clearer, and grounds to say that the documentation is and was correct.
homepage | tutorials | wish list | fun threads | donate
WARNING: copy your posts/messages before hitting Submit as you may lose them due to CAPTCHA
Top

In my real code the timestamp is in the variable, of course. I needed to validate it and compare it with the current time, and I decided to try by using a simple example first. I didn't think there was a difference beetween a variable and a numeric value. My problem is solved, but since there is a discrepancy between the documentation and the actual behavior of the script, I consider it a bug.
Top

Give it a try.

Scripts - Introduction
...
During loading, the script is optimized and validated. Any syntax errors will be displayed, and they must be corrected before the script can run.

If the command executes, it behaves as documented. In the case of a detected syntax error, no part of the script executes.
Top

I ended up here after searching to report the bug, as well, but discovered that the issue is mine. Considering the shortcut suggest they are the same thing only with positive or negative movement, maybe highlighting the distinction in the documentation would be helpful.

With more careful reading, I realized that the TimeUnits sections are different in several ways, but these two lines - one from each description - brought it home:
Top
Post Reply
8 posts • Page 1 of 1