by joedf
@garry ..... " Duterte has urged members of the public to kill suspected criminals and drug addicts."
OH myy...... :O

by garry
Trump wants to deport American Indians to India
Washington (dpo) -
As part of his plan to improve national security and combat illegal immigration, US President Donald Trump intends to send around
3 million American Indians back to where they came from – India. 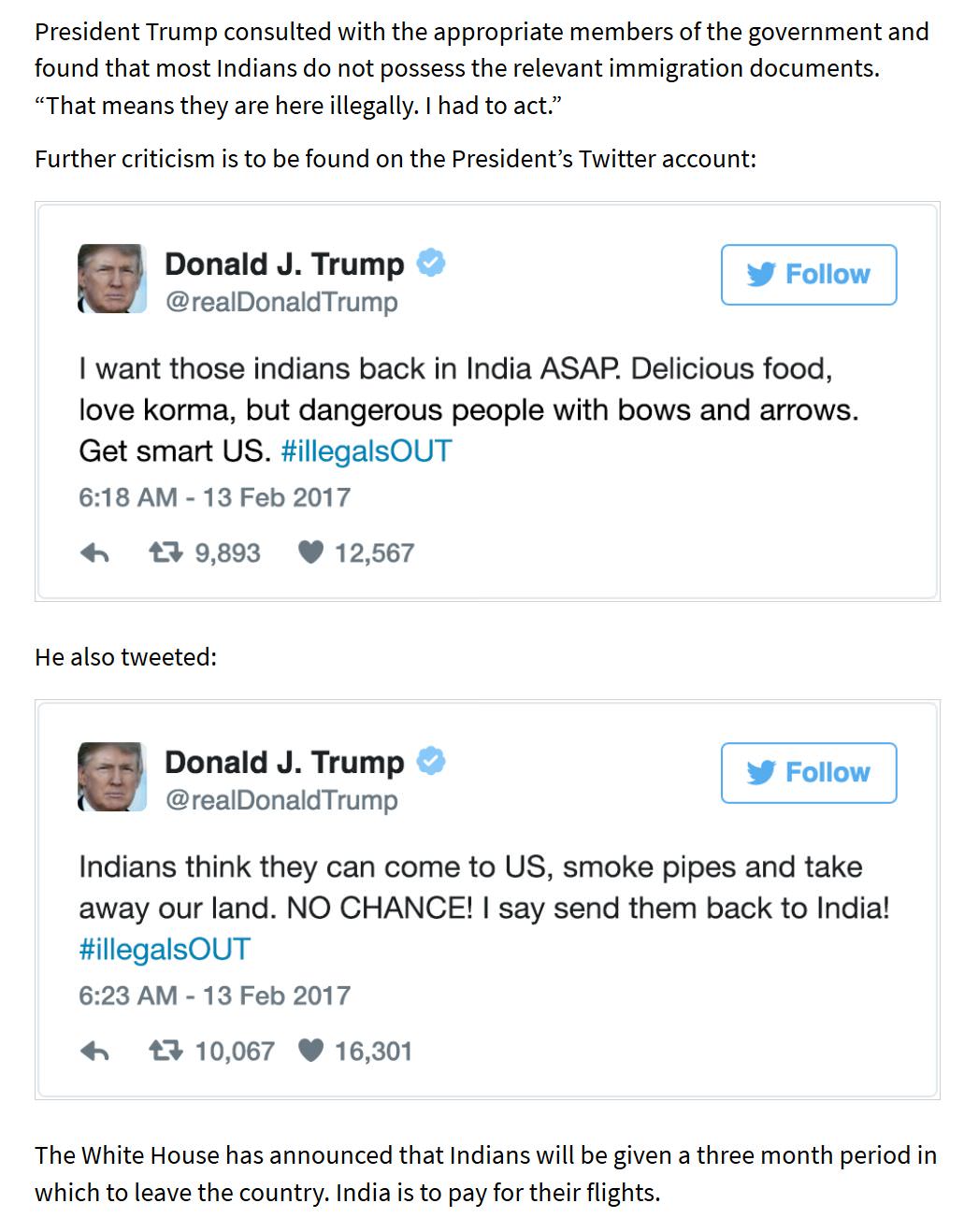 by joedf
These satire websites can actually be quite damaging...

by garry
They’re called native americans.
What Columbus was sent to do by the Spanish was to find a new route to get to India faster; after all,
India was one of the richest parts of the world, where they could trade for riches and go on to the Indies to get in on the Spice trade.
Columbus, unaware of the presence of the Americas, thought that if he sailed west, he would eventually loop around the world and reach Malacca.
However, he ended up landing near Cuba, thus rediscovering the Americas for the Europeans.

While Columbus’ journey is considered a huge historical marker, and an important (re)discovery, Columbus himself was no hero.
On the island where he landed, he and his crew reduced the local population by 90%, forcing the last, miserable 10% into slave labor for gold.
If they didn’t get enough gold, their children and family would be killed.
This horrible policy became the standard for other European colonialists who came to the Americas.
Fast forward to today, and the Native Americans/Indios make up the poorest class in the land that used to be theirs.
So while Columbus was important, he is not to be remembered heroically.

by garry
different way how to destroy iPhone ...
http://time.com/5370220/turks-smash-iph ... est-trump/
Videos of Turkish people smashing, shooting and setting fire to iPhones have gone viral online in recent days, in a show of support for Turkish President Recep Tayyip Erdogan,
who called for a boycott of Apple products in response to new tariffs and sanctions imposed by President Donald Trump.

by garry
SAVE the INTERNET ( in Europe )
https://saveyourinternet.today/

Upload filters would give media companies even more direct control over the internet.
All of us who post and upload content will be considered guilty until proven innocent,
while media companies will continue to face no consequences for abusing the system.
There’s no doubt what they would lead to: Even more censorship.

EU lawmakers must learn from this incident – and from the countless other documented failures of automated filtering:
Automated copyright enforcement doesn’t work.
Upload filters severely threaten our freedom of speech.
They must be rejected.


https://www.eff.org/deeplinks/2018/08/t ... ca-notices
Topple Track is a “content protection” service owned by Symphonic Distribution.
The company boasts that it is “one of the leading Google Trusted Copyright Program members.”
It claims:

Once we identify pirated content we send out automated DMCA takedown requests to Google to remove
the URLs from their search results and/or the website operators.
Links and files are processed and removed as soon as possible because of Topple Track’s relationship
with Google and file sharing websites that are most commonly involved in the piracy process.

In practice, Topple Track is a poster child for the failure of automated takedown processes.

Update August 10, 2018:
Google has confirmed that it has removed Topple Track from its Trusted Copyright Removal Program membership due to a pattern of problematic notices.

by garry
https://www.bbc.com/news/uk-england-sussex-45247499 20180820 London Gatwick
Staff at Gatwick Airport had to write flight information on whiteboards for most of the day due to a technical problem with its digital screens. 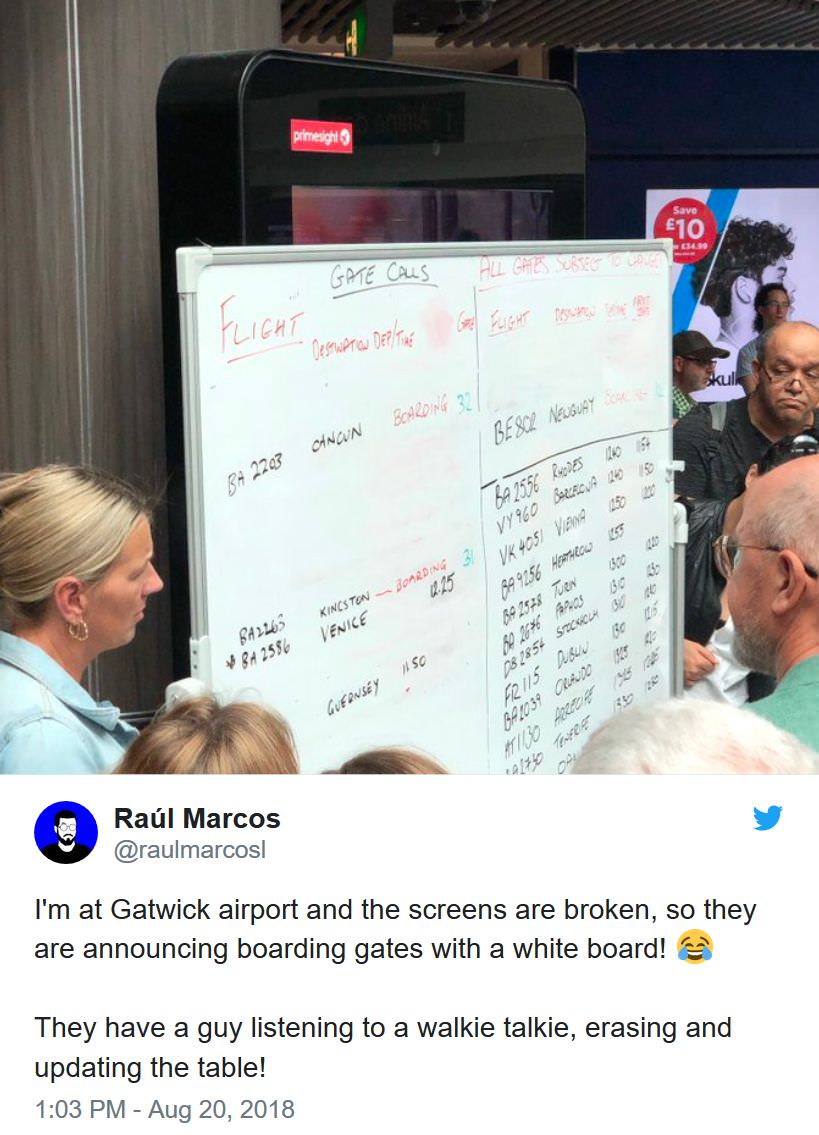 by garry
https://arstechnica.com/tech-policy/201 ... -wildfire/
Verizon Wireless' throttling of a fire department that uses its data services has been submitted as evidence in a lawsuit that seeks to reinstate federal net neutrality rules.

by Nextron
In Verizon's defense, perhaps they've been watching "The Flash" where in some episode router ports started exploding due to excessive throughput (yeah wtf

), so they were actually trying to prevent fires.

by nnnik
I need a new PC. The old dino just doesn't make it anymore

I need a new PC. The old dino just doesn't make it anymore

I use a small computer since 4 months which was very cheap and fast , but newly very slow only when 'windows defender' is running ( Windows-10 )
problem with MsMpEng.exe
a german help :
https://blog.emsisoft.com/de/28644/anti ... ktivieren/

by nnnik
That wont cut it for me either - due to my university course I'll probably need an nVidia 1080 or similar.

by joedf
GTX1080? wutttt why ... I just built my custom this summer with a GTX1060 hasn't failed me ever... What are you doing? Multimedia? Rendering?

by jballi
A bit of levity on a hot Friday night.

by TLM
....wut did i learn this summer