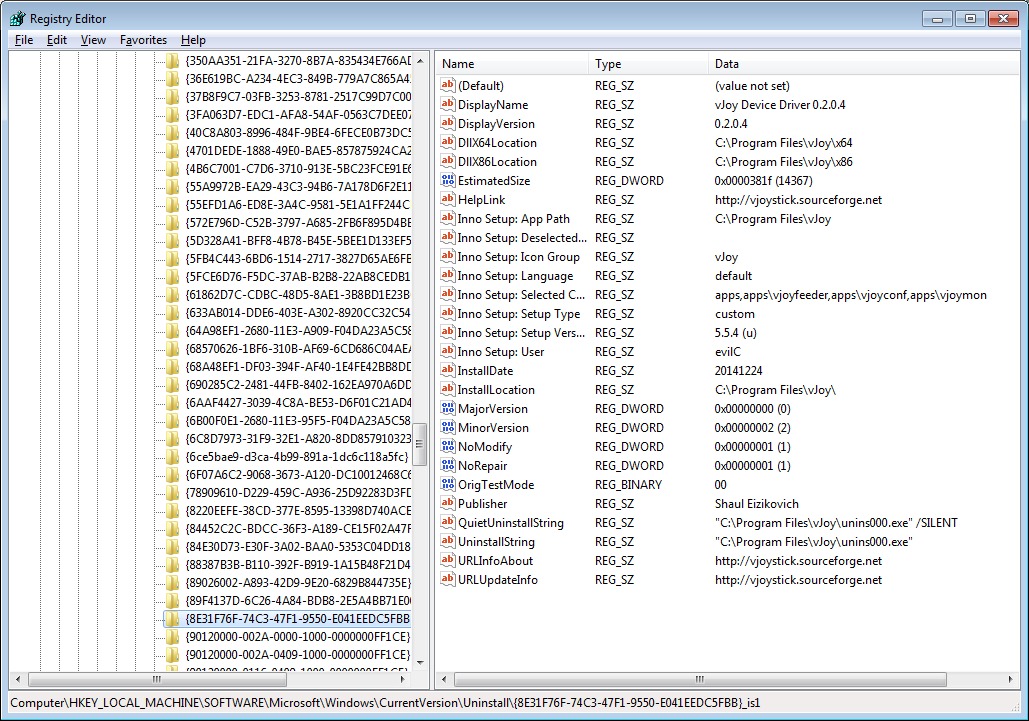 I have the entry, but some is missing on mine.
I'm missing the DLL location keys
Will try adding them manually
Top

If your keys did not get created on install, please report that at the vjoy site.
GitHub page

Yes that's it. I have manually added the keys and working now.
Thanks - I will report it.
Top

Any way to use more than 32 binds? I'm trying to convert my X55 Rhino into a single input device for the X3 games, but I need 49 buttons to completely map both of them

Can I do this via text files, if there's no GUI solution?
Top

Lexikos has no plans to enhance AHK to support more than 6 axes, 32 buttons, 1 hat, so UJR as it stands is limited in that regard, as well as writing your own AHK code.

However, I am currently trying to write a replacement for UJR (working title is UCR - Universal Control Remapper) that will support the full 128 buttons, 8 axes, 4 hats. It will also support remapping anything to anything (ie keyboard, mouse and stick) and allow you to write your own plugins to script your own custom behavior. This is able to read devices via USB, and thus will work around AHK's limitations.

This will be some time off quite possibly, as not only do I have to rewrite AutoHotkey's joystick support, but I also have to code the UI and numerous other things.

The project for the joystick part is here, it is at the early stages right now, but it will be complete and usable before UCR is complete, so if you are willing to learn a bit of coding then you could maybe find the solution you are looking for a little sooner. You would need to pair it with something like my CvJoyInterface library to be able to control a virtual stick with your physical stick.

There are also plans afoot to perhaps make this something of a more serious concern (ie a business) - I think there is certainly money to be made from something like UCR, though I have no plans to charge for UCR itself, more the kind of micro-transaction or "club" model for things like: We certainly could probably do with getting some form of more orderly funding going - if we want to be able to maintain and enhance device drivers (such as vJoy or the above mentioned features), then we need to raise like $500 a year to get our code signing certificate, which to this point has been disproportionately funded by a small percentage of the user-base of UJR. I think Shaul was saying that some of the FFB guys are going to fund it this year but still - a small number of people funding stuff that is used by tens of thousands doesn't seem right.

The ultimate direction I would see UCR going is to replace all the manufacturer-specific software that comes with all input devices. I think in this day and age it is stupid that you cannot change DPI on a logitech mouse with a keyboard key unless you own a logitech keyboard.

So I would be interested to hear what UJR users think of this idea. What would and would not you be willing to pay for? What do you think a reasonable price for various things would be?
What form do you think it should take?
GitHub page

Hmm, hang on...
Yes. This could be done with UJR with some slight modifications, as long as each physical stick did not have more than 32 buttons.

UJR only supports 32 input buttons per stick. It uses vJoy for output, which supports 128 buttons.
So more tabs could be added, the only problem starts to become fitting it into the interface.

I had a look at the code, and it seems that I catered for the possibility of more buttons (I wrote it when vJoy supported 32 buttons), so it was literally a case of changing 3 numbers in the code, and I think I now have a version that will support 64 buttons.
Please give it a test and let me know if it works - I did not test it in anything, and windows does not show >32 buttons, so I dunno if it works - I may need to change more in the code.
The file is here.

I also uploaded a version using a new skinning technique - you can give that a whirl too. The download for that is here
GitHub page

Would it be possible to assign a joystick axis to a button, or is that something that I would have to wait for UCR to be released?

so, this thing is great. I just got an X55 hotas which is two seperate throttle/stick devices, and this has been perfect to 'merge' them into one device for older games that don't know what to do with two

have just one question: has anyone figured out a way to make UJR start at windows startup, but like..invisible? or maybe minimized to tray instead of taskbar? trying to figure out a way to make it 'always on' in a hidden manner. tried making a windows service out of ujr.exe using windows' SC utility but it doesn't seem to start that way
Top

No further features are planned for UJR, but my ultimate goal for the new UCR app would be to offer this kind of functionality.

However, it would not be hard to script this kind of behavior for UJR with AutoHotkey.
Just make an AHK script that launches the UJR exe and minimizes it, and place a link to the script in the Startup folder in your Start Menu.

The AHK script would look something like this (untested code):

You may need to tweak the title, and use a winwait to wait for the window to appear, but it should be a couple of line script at most.
GitHub page

I would like to add a little pause-script option to ujr.ahk:

But it says I need the vjoy library and the ADHD library, presumably in order to compile the modified script. I'm afraid I do not quite understand how to go about getting these things? Where do I put them once I've got them, and how do I include them in compiling?

Thanks for your attention,
Otto CS
Top

I downloaded adhdlib.ahk and VJoy_lib.ahk, and put them in the default path: C:/program files/Autohotkey/Lib, and also in the folder where I have ujr.ahk. I *think* the compilation is finding them, but it says "the script contains syntax errors" even when I recompile the original ujr.ahk.

I think I'm getting a step or two closer to proper compilation, but I'm still doing something wrong. Can anyone see my error, or perhaps point me to the proper documentation?

By the way, I tried this in a different script which does not need the ADHD or Vjoy libraries, and it worked:

(I would like to add this to ujr.ahk, as I mentioned previously)
Top

UJR does not send any hotkeys, so the suspend command will not do anything.

If it is saying the script has syntax errors, then I dunno what would be wrong - maybe you have the wrong version of AutoHotkey?

Intended way to use the source would be to make a folder (Any folder) and put ujr.ahk in it.
Then make sure that adhdlib.ahk is in C:\Program Files\AutoHotkey\Lib
GitHub page

If so, what folders did it look in? It should say like "Looking in C:\Program Files\vJoy\x86\ ..."
What version(s) did it try to load?

Hi, I am getting the "failed to load interface DLL". I've tried a few things but run out of ideas. Any clues?

Please check your registry to see if the following key exists:

If this key does not contain the vJoy install folder, then your copy of vJoy is not installed properly.
Make sure you are using vJoy from http://vjoystick.sourceforge.net , not http://www.headsoft.com.au
GitHub page

I'm using Windows 8.1 x64 and I can't get UJR to work.
I have tested a few other dlls you posted somewhere else, but using those the z-axis is missing.
The registry keys are correct.
Do you know any incompatibilities on Windows 8.1 x64?

As you know, when you push a joystick away from center and hold it in its new position, corresponding game movement (or whatever) will also hold that new position, whereas a mouse recenters itself when it stops moving.

Can this be done with ahk - ujr - vjoy? Of course I'm not asking for anyone to write scripts for me, but I'm only kind of advanced-beginner skill with ahk, and if anyone could tell me what to start reading it would be much appreciated.
Top

Yes you can do this. I don't use UJR as I don't believe it's designed to do such a thing but I do it with a combination of Vjoy & AHKHID. The vjoy aspect should be relatively straight forward (i.e. it's the joystick part) and the ahkhid library is used for getting the mouse input. I use ahkhid as I have two mice connected to the computer, one acts as a mouse and the other as control for some of the virtual joystick axis. The biggest issue is you can't block mouse movement inputs but you can block the windows mouse cursor movement so make sure the game you're using it with doesn't use the mouse for any of it's controls (remap them to buttons keyboard or joystick axis) and you'll also want the game to use the hardware cursor for any cursor type control it may have in it's settings.

Also with regard to re-centering, the mouse doesn't really re-center when it stops moving either it's just at a new position relative to it's initial position, depending on how you program it, you could make it recenter the joy axis after it has stopped moving or make it akin to a throttle axis where it needs to be moved back to center (I tend to do the latter as I use it as the throttle part of a makeshift hotas - I have gaming keypad which sits on a clear plastic sheet which the joystick mouse also sits on, so I move the keypad and the sheet and mouse moves). I also find it helps to have a representation of the joystick position, so I use a Gdip overlay window for that.

I have some proof of concept code for mouse to joystick that I am writing for use by disabled people - please see here: https://github.com/evilC/OneSwitch-Utilities

You want "mouse to joy" or "absolute mouse to joy", depending on how you wish the mouse to control the stick.
Currently these scripts have no GUI settings etc, but this will be added soon.
GitHub page

Users browsing this forum: No registered users and 11 guests