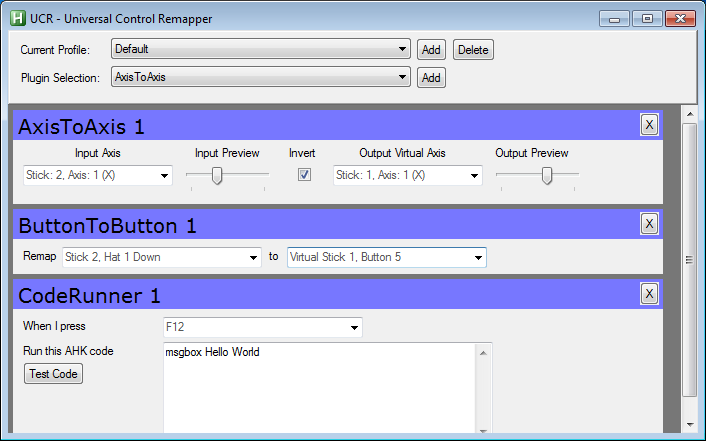 This is a project that I have been working towards for many years. I have recently started collaborating with HotkeyIt, and with his help, things are starting to reach the stage where I feel that we have something worth showing. Things are still in the very early stages though, so expect bugs and usability issues...

My vision for UCR is a GUIfied application that can load AHK scripts as Plugins, with each plugin having it's own UI within the main UI.
The author of the plugin can add various guicontrols to the plugin to allow the end user to configure inputs (ie Hotkeys), Outputs (eg keys to send when the input hotkey is pressed), or configuration parameters (eg for an application launcher plugin, which application to launch when the hotkey is pressed).

UCR can run as a compiled EXE, with the plugins remaining .ahk text files, which the UCR application will dynamically include. Therefore, end users do not need AHK installed, but can still write and tweak plugins.
Script authors can run UCR uncompiled, and debug into the host application. Due to the techique used to include, SciTe will quite happily debug into the plugins also.

UCR uses AHK_H v1 as the interpreter, as this provides the dynamic include and thread handling capabilities that UCR requires.
UCR also showcases the enhancements that HotkeyIt and I have made to the AHK source code for handling of Scrollbars / Auto-Positioning of GuiControls / Parenting child Guis as GuiControls. This code may make it into AHK_L at some point, we don't know.

The point of this release is to get feedback and provoke discussion on aspects of the design or implementation of the project. I am also open to the idea of other people coming on board - not just coders, I could do with help with the visual styling, or even anyone any good with modelling - I have some basic UML class diagrams for the fundamental structure, but that is about it. There are also still numerous decisions to be made as to how various aspects should work, so even if you are just a prospective user, your input is valuable. Hell, I am not even sure I like the name - pretty much everything is up for debate

I am aiming to finalize a lot of stuff by the new year. I have a couple of weeks off over Christmas and have kind of committed to rolling out a new system for the disabled gaming charity OneSwitch around that time, so I am looking to make an alpha release fairly soon.

New version uploaded - prototype 2.
This version has the complete range of inputs and outputs that are planned to be supported on launch:

I have also implemented a basic Axis -> Axis remapper plugin (just invert, no dz or sensitivity for now) and a Button -> Button remapper plugin.
Download link is still in the first post.

Oh and in this release, it is not actually compiled.
UCR.EXE is just AutoHotkey.exe (The AHK_H v1 version), renamed.
GitHub page

I decided to put out an initial alpha, so I patched up the worst of the problems that I could find, and made a proper release thread.
The link can be found here.
GitHub page

evilC wrote:I decided to put out an initial alpha, so I patched up the worst of the problems that I could find, and made a proper release thread.
The link can be found here.

Hi!!
many thanks for your excellent work.
I would like you add the possibility to map button and "axis to axis" also from a virtual joy to another virtual joy, and not only physical joy to virtual joy.
In fact just UJR was able to perform this, and also UCR if you go in the ini file and knowing what you're doing is able to perform it.....

Not quite sure what you want here, but in terms of button and axis remapping, UCR can do everything that UJR could, and more.
UCR can use virtual axes and buttons as inputs, as well as outputs.
If you post on the main thread (linked in the post you quoted) I am sure we can get it running.
GitHub page