Introduction
This 'XRef' program produces an alphabetical cross reference list of all the names, numbers, and words in an *.AHK file, showing the source line numbers where these items occurred. Any quoted information is also included.

A cross reference listing is very useful for:-
Options window
The options window is used to specify which reports are required and provides options to control report format and amount of data to be included, etc. Note that several check-boxes in the options window can be toggled into a third state. In these cases the option text will alter to show more details about the selection made. (See the screen shot below.)


Lone Words
A 'Lone Words' report may be selected in the options, which will show all words which appear only once in the script.


Function Map
An optional extra 'Function Map' can also be produced, showing where in the program functions and subroutines are defined, and where they are referenced. This map is in addition to the main report, however it displays the data in the same order that it occurs in the program being analysed. When '#Include' processing is enabled, the listing will show all processed scripts in order, with the file name at the start of the script section. (See the example output snippet.)


Subsets
There is an option to process a subset of the script; 'Get script subset'. When prompted, enter the starting and ending line numbers separated by a space. This facility can be used to analyse a self-contained portion of a script, such as a function definition.

As well, a different default set of options plus setup can be saved for a general subset-type report (select 'Get script subset' with any line numbers first), and yet another set of subset-type options can also be saved for the currently selected script.

The type of default options in use is shown between hyphens in the title bar at the top of the Options window.


Output
The generated report is shown in Notepad and may be automatically printed to the default printer if required. If a 'page size' is supplied in the setup, the report will be formatted 'n/up' to take up less space.

To show the report correctly, Notepad should be set to use a mono-spaced font. This can be achieved by using the 'Mono' button to set Notepad to its defaults. The old position and size of Notepad's window is preserved.

Script comments are usually excluded from the report, however there is an option to include this information if required. (As syntax analysis is rudimentary in this program, it is possible that valid data in some scripts may be inadvertently flagged as comments.)

Embedded in most report headings will be a summary of any report-changing options selected, thus:An example might look like this: == (hvg) ==.


AHK #Include Processing
AHK '#Include' statements can now be processed to generate composite reports of the complete program, if required. (Script types other than AHK are not supported.)

An extra '#Include List' is produced (see the output snippets example below) which specifies what #Include options were used, and shows for each included file:-This list will also show any error messages that may have occurred during processing.
(#Includes which change the working directory will not be shown.)

To make use of the auto-includes facility in the case where AutoHotkey has not been formally installed but the executable is available, XRef has a facility whereby the AHK executable can be used. As part of the setup, create a shortcut pointing to XRef.exe, and include as the first parameter the full path and file name of the AHK executable to be used to process auto-includes. Subsequently, start XRef with this shortcut. This facility can also be used if there are different versions of AHK present on the computer (e.g. v1 and v2) by creating different shortcuts as required.


Automatic Mode
To process one or more scripts without any user intervention, you can drag and drop the scripts onto XRef.exe (or a shortcut pointing to XRef.exe), and the scripts will be processed automatically using the default options (script or overall). The same will happen if you run XRef.exe supplying the script names as parameters. (If a script can't be found, an error message is shown, then the usual file selection dialog will be displayed.) 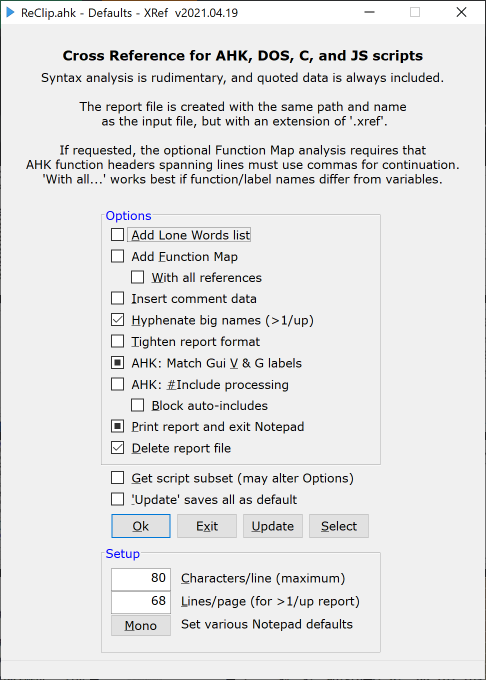 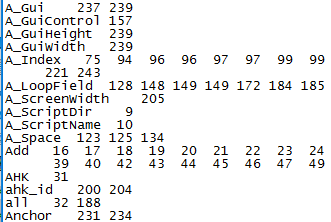 Function Map output with #Include processing 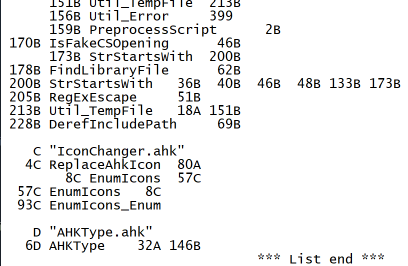 5 April 2019 - 07 January 2019 -
On recent versions of Windows 10, pressing the XRef Mono button would mistakenly clear Notepad's header and footer fields.
Now, pressing the Mono button will only:- 16 November 2018 - n/up reports will now show the page number of the report in the 'page top' line.

12 May 2017 - An error message is shown if the script file cannot be found when in automatic mode.

One of the last changes I made was to the 'Print Report' facility to try and make it work correctly on non-English versions of Windows. I would be interested to hear back from anyone using this option of XRef under these circumstances. (There may be a pause of 4 seconds while the 'print' Windows of Notepad are shown.)

So, any comments on this from users would be helpful.
My scripts:-
XRef - Produces Cross Reference lists for scripts
ReClip - A Text Reformatting and Clip Management utility
Top

Updated 11 July 2016 -
Added two options for 'tighter' formatting, which will generate more compact reports.
Separated out the 'Exit Notepad' option from 'Print report'.
The Notepad window now comes to the front after a report is generated.
Can select a new file to process from the Options window.
Eliminated the possibility of some incorrect references when generating a Function Map.
My scripts:-
XRef - Produces Cross Reference lists for scripts
ReClip - A Text Reformatting and Clip Management utility
Top

Could be very useful, I'm going to try this when I get the chance. Does it include content in #include
files?
Top

No, just the file selected. You can process the #include files separately, as they may not change frequently and thus not need to be reprocessed.

You can also use 'automatic mode' by setting up a shortcut to XRef containing the names of all the relevant program files. You can then run this to produce all the outputs. Note that the reports will still be separate, one per input file.

Amended and added to the description in the first post.
My scripts:-
XRef - Produces Cross Reference lists for scripts
ReClip - A Text Reformatting and Clip Management utility
Top

Hello TAC109. I did a breif test, it looks good and is quick! On the #include matter, for me it would be useful since I often split my (slightly bigger) projects into quite a few files, basically one main script with just a bunch of #include.
Great job though, thanks.
Top

Thanks for your kind comments.

I've read up on #include in the help and the rules are quite complex. The 'file/dir' parameter can include various 'A_' type references, many of which relate to the script's actual location. The related 'libraries of functions' section introduces further complexities where functions can be implicitly included from various folder locations.

Then there is the question of how this extra data should be included in the report. One large combined list with the current neat line numbers list replaced by file/line number references, or many separate reports, one for each file.

I don't see that all the extra programming required as yielding many advantages over what I've suggested, that is to just sequentially select the files to be processed as needed. If you change a couple of files in your program suite, then just run XRef on those files.

The only deficiency is with the optional 'Function Map' report which will be incomplete without the included files. This is not a report I use very often, as this data is also embedded in the main report.
My scripts:-
XRef - Produces Cross Reference lists for scripts
ReClip - A Text Reformatting and Clip Management utility
Top

I have a question.
Your coding style is so unfamiliar to me.
Lots lots of commas and not much spaces.
I'm using Notepad++ and I concluded, it is not human readable codes.
How do you write, edit and debug it ?
Do you use something special method to compress it after you completed ? If so, why ?
And for the exe file.
Do you use your own method to compile it ?
If I open it with Notepad++ (usually, it shows the codes cleaner than mine) I've failed to see the source codes within it.

Thanks for the nice codes.
Top

Thanks for your kind comments!

I suppose my coding style could be regarded as 'normalised'. You will have heard of data normalisation, where basically, any duplicate data is removed and replaced by a reference to a single occurrence (see Date & Codd normalisation). Well, I like to do similar by normalising my code. Not to everyone's taste but it suits me.

I just use SCiTE4AHK as my editor and debugger.

You'll see that my code is very modular. The tricky code I often debug by creating a simple test harness for each routine to ensure that it works correctly. Many routines start with basic code and then are enhanced incrementally, with testing after each amendment.

(Using XRef on itself will reveal a lot.)

I use fincs' AHK2EXE (preview2a) to compile my source and UPX to compress it. (I have found that Mpress can occasionally generate corrupt .exe's.)

[Edit] - I now use the excellent AHK_Compile_II to compile my programs. This automatically compresses with UPX.

As a diagnostic, if you press Win+F2 after generating a cross reference, you will see the structure of the 'q' object which holds the various 'n/up' report data items. (The program uses the 'q' object to produce and select the most compact report.) This diagnostic was a great help when debugging this part of the program.
Last edited by TAC109 on 23 Jul 2017, 01:41, edited 1 time in total.
My scripts:-
XRef - Produces Cross Reference lists for scripts
ReClip - A Text Reformatting and Clip Management utility
Top

Updated 12 May 2017 -
An error message is shown if the script file cannot be found when in automatic mode.
My scripts:-
XRef - Produces Cross Reference lists for scripts
ReClip - A Text Reformatting and Clip Management utility
Top