Demo works. I will have to play around with it later.
Top

Yeah, I dunno if Win7 is supported or not.
Thanks for the link to the article, it may help to link it for people as it explains what Grammars and Choices are quite well.

FYI, In HotVoice, the "GrammarObject" (The HotGrammar class that you get when you do hv.NewGrammar()) is a wrapper around the GrammarBuilder class.
The Choices class in HotVoice is not wrapped. When you do hv.NewChoices(), you get an actual Choices class back.
There is no user-exposed Grammar object in HotVoice, seeing as we need to convert the GrammarBuilder into a Grammar to load it and there doesn't seem to be any point in having access to the Grammar class that got uploaded.
GitHub page

This is going to be an awesome script to try... Thank you so much for making it.... I've dabbled in voice recognition before and found file commands have been super fast.

I'm trying to locate hotvoice.dll -- it didn't seem to download / install with any packages as per the install instructions. Could someone please help me figure out where it's gone / where to find it?

Many thanks
R
Top

r2997790 wrote:I'm trying to locate hotvoice.dll -- it didn't seem to download / install with any packages as per the install instructions. Could someone please help me figure out where it's gone / where to find it?

It is included in the packages from the release branch: https://github.com/evilC/HotVoice/releases - just tested, I found the dll in the Lib folder of Hotvoice.zip
Top

Thanks @gregster @evil ... I downloaded the source zip I think and it wasn't there but just downloaded the Hotvoice.zip file on the Releases and all is good

Many thanks for your help... can't wait to try it out now!
Top

Seems like the DLL issue has been resolved (and by installing the 64Bit version of the Speech engine).

But now I am getting this issue: 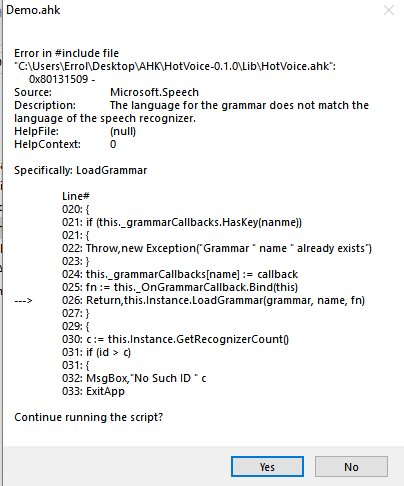 A language issue despite downloading a ton of the .msi language files.

Frustrating... anyone else had this issue and know how to fix it?

With the 0.1.0 version I also get this error message, if I set the recognizer id to 1 (which would be the second language I installed).
Setting it to 2 ('lightweight' in this case) doesn't crash, but doesn't recognize anything (but that was expected).

With the older versions 0.0.3 and 0.0.4, setting the id to 1 doesn't create an error, but doesn't recognize anything either. The volume level doesn't even move.

All three versions seem to work only with the recognizer id set to 0, although two language packs are installed.

Perhaps there is something still hardcoded to 0 in the dll?

Btw, there seems to be a typo in

But that shouldn't cause the problem mentioned above...

Edit: There is another minor bug in Initialize(id) - the check for a valid id isn't working in all cases, because id is zero-based. I think this should fix it:

@gregster Yeah, I suspect that only English works, as I tried installing French and Spanish, but could not get them to recognize anything I said.
It could just be that only recognizer 0 works, I dunno. If anyone could shed any light on it, that would be great.

Thanks for the Initialize fix - it was also outputting c, not id - duh!
GitHub page

@evilC, I think you have to have a CultureInfo object for each language. I found this code snippet in the article linked above.

ohhh, that sounds likely.
Can I work out what to pass for the CultureInfo from what the user selected for the language pack, I wonder?

I will look into this now
GitHub page

Actually, it doesn't seem to be a question of language, but only of id.

I have german on id 0 and it understands it quite well. Even using the original english words - with (awful sounding) german pronunciation - worked...

while english pronunciation didn't work then. Trying to use US english on id 1 would throw the error above.

OK, I think I got it.
Try the attached DLL (You may well need to unblock it)

Meh, sod it, I have made a new release - if it breaks stuff I can always revert out. Seems pretty safe tho.
There are also a number of other fixes in there.
https://github.com/evilC/HotVoice/releases/tag/v0.1.1
GitHub page

Looks good so far. German on id 0, and US English on id 1 work here now.
Thanks a lot!
Top

Wish I could test it

Still haven't gotten it to run on Win7.
EDIT: Downloaded the SpeechPlatform runtime from here and installed it.
Still throwing an error, but at least the DLL loads. I will uninstall and reinstall the SDK and post results.
EDIT: Reinstalled SDK, both it and runtime now 64-bit. Still get the CultureInfo.InvariantCulture error.
Error is this:
Spoiler

Reinstalled English and German due to 'CultureInfo.InvariantCulture' error, now getting this error:
Spoiler

It seems like the language pack you have is of type CultureInfo.InvariantCulture ?
I was following the advice here - https://stackoverflow.com/questions/246 ... -recognize
So basically I take the culture from the language pack and pass it to the constructor of the recognizer

Oh duh, surely I should have used this?

DLL attached that does this

BTW I am sat in the AHK Discord channel - it's probably a lot easier to exchange files etc in there, and it supports screen-share etc...
GitHub page

Users browsing this forum: No registered users and 24 guests