This library can be distributed for commercial and non-commercial use and I actively encourage both. I would appreciate it if people give acknowledgement for my work and would be nice to have pasted once at the top of your script something similar to:


Thanks to tic (Tariq Porter) for his GDI+ Library
ahkscript.org/boards/viewtopic.php?t=6517

or anything more elaborate if you feel like it!

If your OS is not >= XP then you will need gdiplus.dll

A link to the original post as there is so much information contained in those 93 pages:

Example 1: Gdip.Tutorial.1-Draw.Shapes.ahk - Create a simple gui and draw an ellipse and a rectangle

Example 2: Gdip.Tutorial.2-Draw.Outlined.Shapes.ahk - Create a simple gui and draw the outlines of an ellipse and a rectangle

Example 3: Gdip.Tutorial.3-Create.Gui.From.Image.ahk - Create a gui from an existing image on disk

Example 4: Gdip.Tutorial.4-Draw.Circles.ahk - Create a fullscreen gui and fill it with random ellipses

Example 5: Gdip.Tutorial.5-Create.Bitmap.ahk - Put a few shapes into a bitmap and save to a ".png" filetype

Example 6: Gdip.Tutorial.6-Image.Editing.ahk - Take files from disk, load them onto a background and save to a ".png" filetype

Example 7: Gdip.Tutorial.7-Draw.draggable.rounded.rectangle.ahk - Draw a rounded rectangle for a gui and allow it to be dragged with the left click of the mouse

Example 8: Gdip.Tutorial.8-Write.text.onto.a.gui.ahk - Take the rounded rectangle gui and add text to it, showing all the text options possible

Example 10: Gdip.Tutorial.10-Rotate.Flip.or.Mirror.an.image.ahk - Rotate, flip or mirror an image on a layered window

The BRA Library so far: BRA.ahk

Example 12: Gdip.Tutorial.12-Pixelate.a.bitmap.using.machine.code - Use LockBits and machine code to pixelate an image and update it quickly

by tic
File links will be moved from autohotkey.com. Support will also be dropped for the old autohotkey, and library updated to take advantage of objects

by GeekDude
Great to see you've moved it over here. Is there an ETA on any updates? Or is it more of a "I've planned it, but who knows if it'll ever get done"?

GeekDude wrote:Great to see you've moved it over here. Is there an ETA on any updates? Or is it more of a "I've planned it, but who knows if it'll ever get done"?

Good question! I would like to be proactive and welcome any nudging every now and again to get me going.
I've taken the first 2 steps at least....I've created this post, and have now moved all the links to github, which will make changes much easier to track.

Next step is to decide on the best way to treat gdi and gdi+ bitmaps and graphics and their associated handles/pointers as objects. I have an idea of how, but would need testing to see if it works comfortably in practice.

by tic
As a proposed possibility, how does the following look?

It is not completely thought out, as I would need to consider how to handle gdi bitmaps for windows and gdi+ bitmaps for the file system, but if I get enough thoughts on this then I can begin work.

Any better naming than Gdip_ObjectCreate() ?

And dispose should probably be handled in __Delete if it was not called manually.

by lexikos
I suppose that you could model it after the GDI+ object model in .NET.

by Soft
nice to see you here!

by Pacsa
Hi guys,
yesterday, I updated my AutoHotKey from 1.1.10.01 to 1.1.19.03 on my Win7 64bit machine. I had been using this script http://www.autohotkey.com/board/topic/6 ... /?p=662909 for quite a while without problems. Unfortunately it stopped working after the update. To be exact, it's still working in the background, but the clock itself doesn't appear on the screen any more. This is why I suspect that something is broken on the graphical side. That script was not written by me originally, I just added some non-graphics-related features, so I don't have much experience about how to go around with Gdip_All.ahk. Anyway, it was working fine with v1.1.10.01, and it is not working now. Btw, I also updated Gdip_All.ahk from the version at http://www.autohotkey.net/~Rseding91/Gd ... ip_All.ahk to the version shared in the first post of tic, which was updated last on 2/20/2014, but I experience the same. Do you have any ideas, what could be the reason? I also checked the recent changes in AutoHotKey, but I couldn't find a relevant change.
Your help is much appreciated.
Csaba

by GeekDude
Working here, as far as I can tell 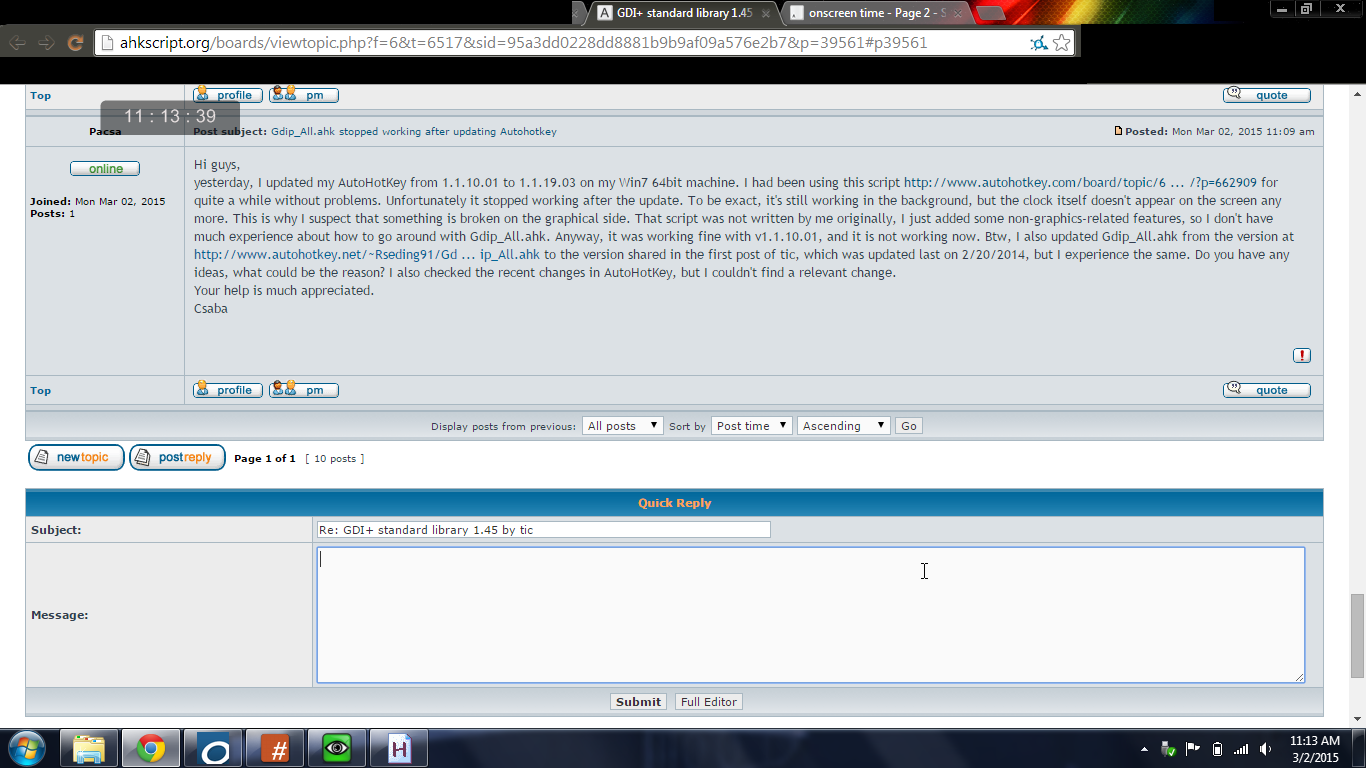 by Pacsa
Sadly, still the same. It is not working. I even tried the ansi version. Thanks though.

by Pacsa
I downloaded the old version, and now I can run the script again, just as before. I tried some more recent ones, and it turned out that the clock is failing already with the next one: v1.1.11.00. I only tried the x64 versions. So it looks like the changes appearing first in v1.1.11.00 make the difference?..

And at the same time, it seems to affect only x64 machines? At least me, but as we see, GeekDude can run it on a 32 bit system, but for me it's not working even with the 32 bit executable.

by GeekDude
Maybe it's DPI related? I have my DPI set to the normal value of 96, what's your set to?

by Pacsa
Yes, indeed, it was the DPI. I was using the default 125% setting, now it's on 100%, and the script is working again. Thanks for the hint.
Nevertheless, I quite liked the 125% DPI. Is there a way the to return to that? The only thing I could think of was to disable the new feature by adding the line:
Gui -DPIScale
It didn't work. Right now I don't have the time to read all the relevant parts of the manual (of Autohotkey or the GDI+ library?), but I have the feeling that this feature was not meant to work this way.