by Alguimist
Version 2.0a:
- Initial implementation of the debugger (DBGp by Lexicos and Fincs). The execution flow and variables of a script can be examined step by step.
- AutoGUI now starts in Editor Mode by default. The GUI designer is to be regarded as the second nature of AutoGUI.
- The tab bar can be positioned on top or on the bottom, using the standard style or the button style (I prefer tabs as buttons on the bottom).
- Drag'n drop of tabs was reimplemented based on the code of AkelPad.
- Lines can be bookmarked for quick navigation with the F2 key. Jump from one bookmark to another with Ctrl+PgUp/PgDn. Bookmarks are not preserved when the file is re-opened.
- Bookmark, breakpoint and debug step markers for the symbol margin. If a debug session has been started, clicking the symbol margin adds a breakpoint. Otherwise a bookmark is added.
- Rearrangement of menu items. Some items from the Edit menu were moved to the Search menu, some items from the Options menu were moved to the View menu, etc.
- View menu items: "Collapse All Folds" and "Expand All Folds".
- The keyboard shortcut for "Run Selected Text" was changed to Ctrl+F9.
- Edit menu: Move Line Up/Down: Ctrl+Shift+Up/Down.
- Find/Replace dialog: message boxes were replaced by balloons.
- File menu > Save All.
- File menu > Save a Copy As...
- Options menu: "Ask to Save on Exit". Prompt to save files when AutoGUI is closed.
- Fixed and improved context help.

by guest3456
this is definitely one of the most thorough projects on here. keep up the good work

by kczx3
Is there anything special needed to get the debugger to work? I just get an error that it couldn’t connect to an active debugger.

kczx3 wrote:Is there anything special needed to get the debugger to work? I just get an error that it couldn’t connect to an active debugger.

by xuezhe
great job. Could you update it for AHK_L v2.

You can configure a path by pressing Alt+F9 to run an alternative version of AHK, such as AHK v2 or AHK H. Then, on every subsequent use of Alt+F9, that version runs the current script, but the Scintilla lexer may not be appropriate for v2.

Converting the entire code to v2 may take a long time and I'm not yet familiarized with the differences. It should be noted that AHK v2 is still in alpha stage. Syntax is subject to change. AutoGUI is also alpha but for another reason: the AHK lexer must be rewritten, among other things.

by kczx3
I have attempted at customizing Editor.ahk to have a dark monokai theme. I have most of the colors figured out. Some of the styles though I can't seem to figure out what exactly they mean. Nor have I been able to find a style for altering the appearance of operators. But for some reason, the code for getting the currently selected text doesn't always work. Often times, I will select a word and it interprets the selected text as "5". So all 5's in the document also get highlighted as matching text. Can you see anything different in the attached version that would cause this? I also made some changes to the brace matching code so that it would highlight unmatched braces. Though I don't think that works all the time either.

EDIT: A few things I've determined so far. I needed to call SetCaretFore before the SetCareLine* methods. My BraceMatching code was also breaking stuff. I'd like to see the indicators used instead of just changing the color and font weight of the braces. Additionally, I wanted to set the SCE_AHKL_BUILTINVAR style to be italic but that also breaks the highlighting of matching text. Not sure why.

kczx3 wrote:Often times, I will select a word and it interprets the selected text as "5". So all 5's in the document also get highlighted as matching text.

In the past, this issue affected all Scintilla messages where wParam lParam should be interpreted as a string. There might be some exception somewhere that was not fixed. Could you provide a test file where the mentioned problems occur? HighlightIdenticalText seems to be working fine, the only limitation is that spaces cannot be in the selection.

At some point I will revise and rewrite the lexer to fix some bugs and maybe include a category for operators. The theme you made looks good. I also have plans to design a custom theme dialog.

by Alguimist
Version 2.0.1:
- Fixed: the tab bar was not being resized to full length when switching from Design Mode.
- Fixed: collapsed folds were not being expanded when hiding the fold margin.
- Added a button to toggle the fold margin to the editor toolbar.
- In case of an error message saying that the debugger failed to connect, go to Options > Debug Settings and change the port. 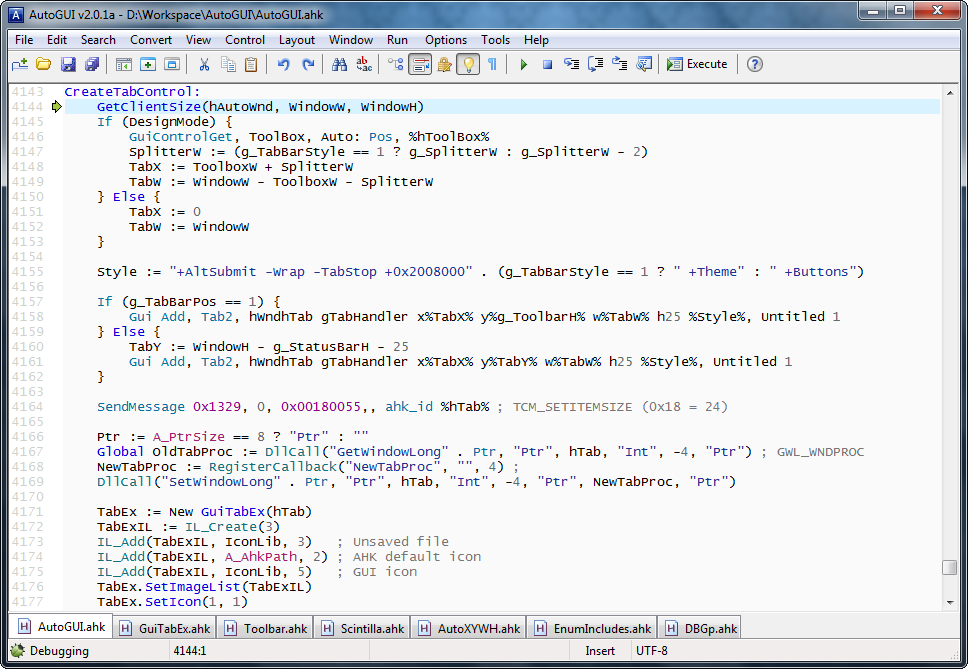 A screenshot showing AutoGUI debugging itself. 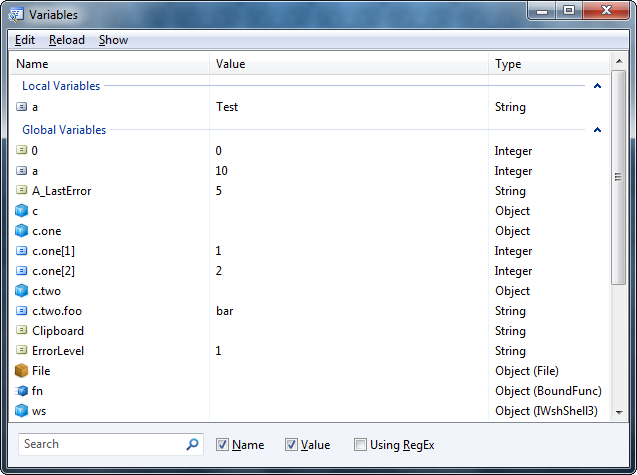 Notice that A_LastError is injected in the script and double-clicking on it in the list of variables shows the system message. In the example above, a double-click in A_LastError shows the message "Access is denied".

by Alguimist
Version 2.0.5:
- The debugger can now be attached to a running script. Go to Run > Attach Debugger.

by Alguimist
Version 2.0.6:
- New option: Remember Session. A file called "Session Saved on Exit.session" is saved when AutoGUI is closed containing the names of the files currently opened. The files will be automatically re-opened the next time AutoGUI is launched. This option can be enabled in the Options menu.
- A file cannot be opened if it is already opened in another tab.
- Bug fixes and improvements in Autoclose Brackets.

by joedf
Only getting better

You should definitely make an installer version and add file association.

Thanks, Joe. I have been planning to create an installer for some time (using NSIS), which could also deal with the file association. Meanwhile, the "installation" of AutoGUI is done manually: save the file in the scripts folder, right click to decompress the files and confirm the overwrite of a previous version, if needed.

by joedf
Cool! I have my ASPDM one that can be used as a template. Looking forward to that

by Tomer
You really need to start considering making this tool official AHK.

by joedf
Yes, that's why I suggested the installer. That will help "officialize" things, but still always keep a portable version available. I see use for both.

by Tomer
i agreed you should consider installer version if you want to make it officel someday.

1 requment please: add a IntelliSense suggestions automatically while typing (also by pressing ctrl + space) like in VS and SciTE4AutoHotkey

Tomer wrote:Add a IntelliSense suggestions automatically while typing (also by pressing ctrl + space) like in VS and SciTE4AutoHotkey

Autocompletion is turned off by default because it is not context-aware: all keywords are available are any context. Ctrl+Space shows the calltip and Ctrl+Enter invokes the autocompletion list (with a minimum of 3 characters typed). If you want the autocompletion list to pop-up while typing, go to Options > Code Completion. Pressing Ctrl+Insert while the list is visible or when the caret is in the keyword also inserts the parameters of the command/function.
All times are UTC-05:00
Page 1 of 8
Powered by phpBB® Forum Software © phpBB Limited
https://www.phpbb.com/