Discuss the future of the AutoHotkey language
Post Reply
79 posts 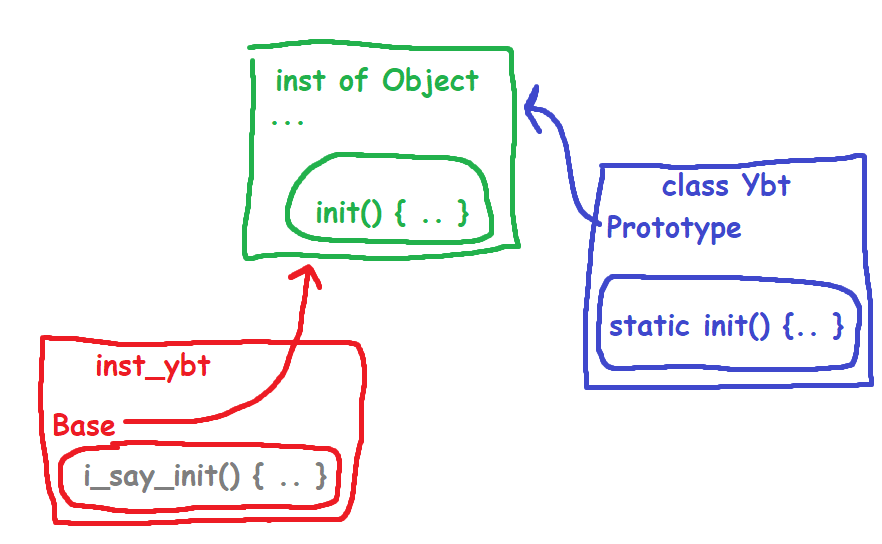 the "bubbles" denote which object the methods are defined on. in other words, what ud get back if u were to enumerate that object with .OwnMethods()
Top

@swagfag I wasn't aware ur reply is on the 4th page so I kept adding stuff to my prev. post. Great explanation

That killer-picture and ur explanation should be put into the documentation.

to resume:
For now, for json.dump I just add an additional loop calling .base.ownmethods. U defeated my #34, the only grumble left is obj.ownmethods to be extended in the future to additionally enumerate .base for methods so as to mirror (emulate) obj.ownprops mode. Updated #34 in OP (hid complaints under a spoiler).
In the past, I used the following syntax in AHK V2-103 to exploit fat-arrow function style with methods (=> wasn't supported for methods back then):
methodN:=()=>msgbox() and used some __init method to do other [instanced] methods initialization and that way props and methods (essentially, pointers to functions) were following the same suit.


40. in the future if more data structures are added, id want them to enumerate in a natural way that makes sense for them, not to satisfy an arbitrary constraint.

From that point of view, it makes sense. I feel the majority is against it. My decisiveness towards for-loop predictability is swayed by the arguments. Yet the list is my point of view, my wishlist - so for now I'll keep mine and add ur reasoning to the #40 with red color for others to judge.


46. i thought interpreter-altering directives were off the table. a better solution is ripping the bandaid off

Some ppl r against surgery

well, we have added #required preprocessor directive and there will be others, and who knows, it might end up with a full-fledged preprocessor being added in the future, so having #syntax strict for now could suit as a transition phase helping ppl get used to no-commands mode.


now that i think about it, if adding extra special operators(eg * ^ & out) would simplify the implementation/provide more robust error detection, go for it.
at the very least it would serve to better document outparam usage

exactly. Also it helps to memorize parameters order. and for ppl who don't care -> simply initialize such vars to suppress warnings. And later on, if it got accepted by the majority, using out might become mandatory.
Top

48. thats faux-command syntax for u. because theres nothing to infer a get/set context, its interpreted as a feeble attempt at method/function call.

I suppose its worth being #48 then.

So if explicit expression syntax used by enclosing it in parenthesis, it works:

It reminds me (not an expression? its a function call then!..):

Basically the major issue of command and function syntax co-existence is the general expectation that follows other languages (C/CPP,D,E,F, Go and so on - the majority of them) design rule: a variable/object member's name with () following it executes the function/method with that name, a name w/o () is treated as a variable/object/pointer. And I can't help it - I keep shooting at my foot. Also, var inside [explicit] expressions and outside them (after control flow statements, in the line beginning) processed differently and misleads even
more:

I tried to clean up OP again. Added #48.
BTW, what does the community think of #24 blatant issue?
E.g., that bug (against expectation) swallows the whole line in here (just run it and see the parsing time error, don't mind runtime errors):

1 more inconsistency with control flow statements. if (expr)=if(expr), but return (expr) is not the same as return(expr).

Concerning V119's slowdown (https://www.autohotkey.com/boards/viewtopic.php?p=344631#p344631)
I found something. Run this with V2-118 and V2-119. 6% slowdown for average result (rightmost). Reproducible. Steady 6-7% (0.38mcs vs 0.41mcs) on each run. But unlike the test script in the link above, min result is not deteriorating. My wild guess its indicative of garbage collection, dynamic memory allocations, or something like that inside the interpreter. I benchmarked a complex AHK project (5-7k lines) that yields 12% slowdown on average. Something definitely went askew with the last update.

Not on my pc.
Top

I mostly use Win 10 LTSB/LTSC (stable but reduced functionality builds). I tested on 4 different machines (2 desktops and 2 notebooks), gonna test Win7 OS sandboxed in a virtual machine. Could u please post ur output for the latest script and for the test2.7z one? Addition to #48. In C, return (expr); vs return expr; vs return(expr);. Its dependent upon personal taste: all the three variants r legit. The same goes for case, throw and probably some others.

back to AHK V2: we've got this inconsistency:

Making parenthesis mandatory for every expression (condition, returned value) following a statement keyword: would it reduce the parser's complexity and increase performance?
Top

That's what I do in the previous test suit test2.7z by measuring 1 relatively huge chunk of real-world data processing. Please share what results u've got for it as well

Correct. I didn't run the other test (yet, maybe)
Top

49.
https://lexikos.github.io/v2/docs/commands/Trim.htm
Any string value or variable. Numbers are not supported.

So it silently converts a pure number (integer/float) into a string before trimming it.
Either the documentation needs to be updated to mention that behavior or the command trim|ltrim|rtrim to be changed to throw ("expected a number but got a string" or something like that).
Top

This is the conventional behaviour.

Caching wrote:AutoHotkey automatically converts between numbers and strings in cases like "Value is " myNumber and MsgBox myNumber.

Then this documentation article needs to be updated:
Any string value or variable. Numbers are not supported. -> Any string/numeric value or variable. 50.
Debugging facility. To add ObjRefs(obj) returning object's reference-counting to replace this undocumented object's data use with a built-in function:

So built-in ObjRefs(obj) could solve it all.
Top

We already have ObjAddRef / ObjRelease if we need that.
Top

Yes but what if a reference counter is unknown and/or the culprits that increase it r unknown as well, and we need to obtain the count (for debugging purpose)? For a complex project it might be very hard to manually keep every reference in check.
Having the ability to count the object's references would help A LOT. For example, Python has that functionality via garbage collector's .get_referrers() and system's .getrefcount().
Top

Having the ability to count the object's references would help A LOT.

As I said, use objaddref/release,

Yes but what if a reference counter is unknown and/or the culprits that increase it r unknown as well, and...

I don't know what you mean.

I disagree. Number are not supported means that it will not consider numeric input as a number and return a number, as you saw, numeric input is converted to string and returned as string.

objrelease does return the references number. Well, one can live with it for debugging purpose by adding a new object reference and then removing it to get the function's return value. ok.

We talk from different points of view - developer and user. Not supported means not maintained (throws an exception, etc). Replacing it with "numbers r converted to strings" would clarify the function's description. I tried V122. Well, mysterious slowdown is not fixed. still 4% (or more) as slow compared to V118. Maybe some compiler options were changed, e.g. optimize for speed flags to optimized for size flags?
Top
Post Reply
79 posts