payback87 wrote:Alright after fiddling around a little, I found two issues.
1. Code Folding -> I can't fold / unfold from the menu. None of the menu entries work. I downloaded the Fold.ahk plugin.
2. BookMarks -> same as above, doesn't work although BookMarks.ahk is installed.

Unfortunately there is no Error unlike before I installed the plugins. Just nothing seems to happen.

Where did you place the ahk files? they need to be in the plugins folder. If it does not exist make sure it is in the main folder that AHK Studio is in.

If you had placed them there then let me know. I will take a look and see if they work for me and if not I will work on them.

Edit:
-I tried the plugins for folding and bookmarks and they both worked for me. They do rely upon a comobject that Studio provides. Some have had issues with it in the past so if you are still having trouble that may be the case.

Yes, I put those in the plugins folder. I also downloaded the raw themes.ahk from your git and placed it there - this plugin works fine. I also replied to your PN.
Top

I just did a fresh clone from github and installed all plugins. On each plugin I try to start, the following error pops up (not exactly the same - but alway s the error 0x800401F3 on ComObjActivate("AHK-Studio")):

What am I missing?
Top

Well I can't say exactly it looks like the comobject is not being properly registered. I would love to be able to have a video conference with one of you guys and see if I can try to figure out what is causing the problem. Get in touch with me if you are interested.
John H Wilson III 05/29/51 - 03/01/2020. You will be missed.AHK Studio OSDGUI Creator
Donations
Discord
All code is done on a 64 bit Windows 10 PC Running AutoHotkey x32
Top

And I was wondering how can I enable the toolbar that there was before at the top of the Window, but it's not there anymore (at least for me).
Top

And I was wondering how can I enable the toolbar that there was before at the top of the Window, but it's not there anymore (at least for me).

Right click on the main editor and split it into a new Scintilla window. Then right click on the new window and choose control type toolbar.
John H Wilson III 05/29/51 - 03/01/2020. You will be missed.AHK Studio OSDGUI Creator
Donations
Discord
All code is done on a 64 bit Windows 10 PC Running AutoHotkey x32
Top

maestrith,
With other editors, I've been able to set my own Autorun.ahk script up. How can I do that with AHK Studio?


EDIT: Nevermind... found where to set it under Options > New File Template in the menu.

Loving this editor so far!
Top

And I was wondering how can I enable the toolbar that there was before at the top of the Window, but it's not there anymore (at least for me).

tnx, got the toolbar back but not with the default view and icons

1.003.1
Changed:
-Previous Scripts: Search feature only works in the filename not the entire path
-Editing Hotkeys: You now must hit enter, or click the button to set/change the hotkey
1.003.2
Added:
-Require Enter For Search: When you have larger files and you start to use a search string with a common letter it can take a bit of time for the highlighting to complete.
This helps a lot with that.
-Added a delay on the quick find text entry to help with the above issue as well.
-Multiple Selection: The cursor will change to reflect the fact that you have multiple selections active.
Changed:
-Settings:
--Menu Editor: Where you can edit the Main Menus for AHK-Studio.
--Options: A ListView where you can quickly set all of the Options in AHK Studio.
--Auto Insert: Control of what characters get automatically inserted () {} [] <> etc.
--Edit Replacements: Allows you to setup replacements for text (eg. gab -> Gui, Add, Button)
Fixed:
-Closing the About window was causing the program to stop responding.
-If you have multiple Projects that use the same Includes they will show edited markers and also the same file when editing them.
Fixed: Reported by Run1e
-Setting Studio as the Default Editor was causing an error with the variable name.
-Oddities with Alt+Gr.
Fixed: Reported by tscv11
-Word Wrap: Checkmark out of phase with the option.
Changed: Suggested by Run1e, evilC, and I am sure others.
-Windows that are out of bounds of the monitor (hopefully even with multiple monitor setups) will be centered into the main monitor.
Fixed: Reported by Graushwein
-Double Selections: This is caused when you have the mouse near the selection and hit Ctrl+C.
Fixed: Reported by Run1e
-Having multiple instances of the same Include in more than 1 Project and then removing it from a project was causing issues.
1.003.3
Changed:
-Re-Wrote the backend for the GUI
Added:
-Right Click Menus:
--Split Control now has the available controls below them so you can quickly add in whatever type control you want (All but Toolbars)
Fixed: Reported by AfterLemon
-Inline open braces with text after them was causing a major issue
-Fixed an issue with the Omni-Search/Code Explorer
-Position data getting messed up causing incorrect caret positions
-Highlight Current Area: Ability to change it, not yet implemented in the Themes just yet
Fixed:
-Includes In Place
-Position data not updating when using anything other than the Project Explorer to change files
John H Wilson III 05/29/51 - 03/01/2020. You will be missed.AHK Studio OSDGUI Creator
Donations
Discord
All code is done on a 64 bit Windows 10 PC Running AutoHotkey x32
Top

Thanks, great tool! I may try it now over SciTE4AutoHotkey.
Top

Tomer wrote:Thanks, great tool! I may try it now over SciTE4AutoHotkey.

Sorry I missed your message

Maestrith,
Regarding the issue I reported where the VB (Variable Browser) and the DT (Debug Tooltip that you hover stuff to show values) where showing inconsistent and incorrect values. 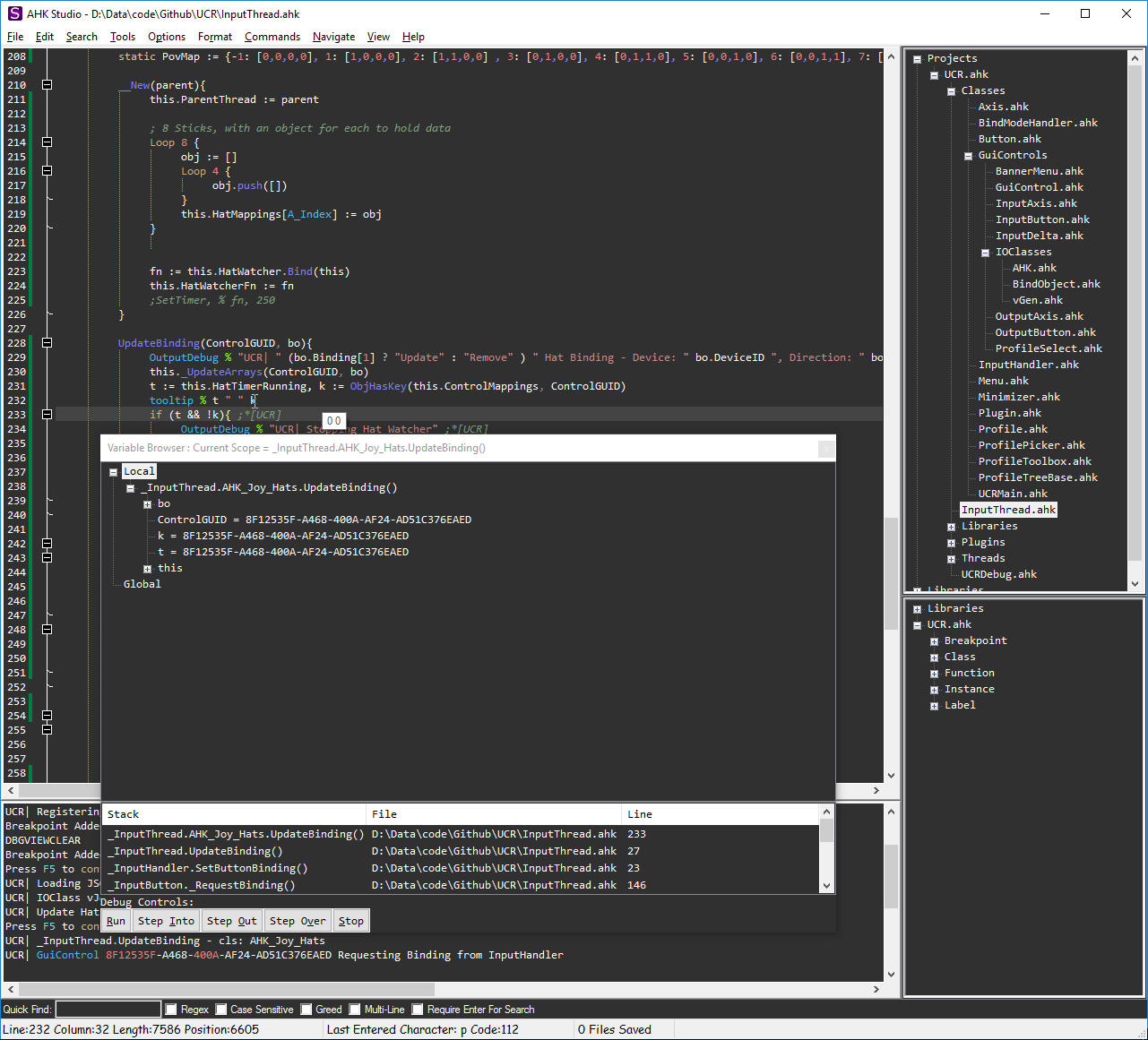 Here you can see that the VB is showing k and t holding GUIDs, and the code is paused on line 233: if (t && !k){
Two lines above, t and ka are defined: t := this.HatTimerRunning, k := ObjHasKey(this.ControlMappings, ControlGUID)
Since ObjHasKey clearly does not return a GUID, we can safely assume the VB is wrong.
The line above shows that I output the true values to a tooltip - t and k are both 0.
Not shown in this picture, the DT was showing a different, incorrect value (I forget what, I think it was empty).

So, in our call, when you were screencasting to me while trying to repro, It finally clicked what probably caused it.
At about the same time, I encountered Issue #77 ("AHK-Studio not always showing file in it's true state").
In this bug, I was in studio, had hit save, nothing was showing as changed, but my GitHub client was telling me otherwise. So I verified by opening the file in notepad, and sure enough, there was a difference in the code that was on disk.

So, my theory as to what was going on with the debugger is simply this:
Due to the fact that studio thought it had one copy of the code, and the debugger thought it had a different copy of the code (Because the AHK interpreter would load it from disk, getting a different file to the one studio has), then the offsets of stuff would be different (Or something like that, pointers pointing to wrong place etc). There quite possibly is no bug in the Studio debugger, there is certainly a bug in whatever holds the file in memory and decides when to write to disk (Issue 77). This would also potentially explain how the DT could show one value, but the VB another. There must be some kind of lookup going on - the DT must ask "What is the word at line x, column y", or some other "What variable is under the mouse?" type question. So I could see how the word lookup part could result in it trying to get something different to the VB, but also wrong.

How about making a check before starting debugging? ie make sure the file sizes match or something?
GitHub page

1.003.4
Fixed: Reported by evilC
-Auto-Complete not stopping when adding (){}<>...etc #84
-When using a hotkey and saying no to downloading a plugin it would throw an error #80
-Having to select single % when deleting a % with Smart Delete enabled #78
-If you are debugging code that is folded and it needs to show a line it should now expand the folds #76
Fixed: Reported by megabugman
-When using Save As on a single file it was creating a new Untitled file #67
John H Wilson III 05/29/51 - 03/01/2020. You will be missed.AHK Studio OSDGUI Creator
Donations
Discord
All code is done on a 64 bit Windows 10 PC Running AutoHotkey x32
Top

@maestrith
Can you add an option to set different background color to functions?

Wow! This looks like a super-powerful tool for AHK.

Could someone kindly explain where this is done in the current version?
Top

Here's the solution I came up with: grepped AHK-Studio-master recursively, replaced \bsize="10" with size="14" (I was happy with Consolas).
Works, but I'm sure there's an easier way.

Next question: how are you guys getting that beautiful toolbar at the top with the big RUN button? Is that a plug-in?
When installing and running the latest version, all I see is a text menu.
Top

This results into that:

@evilC
Nice theme, what is that?

Drugoy wrote:This results into that:

Hello. Sorry for maybe my foul, but have this err:

Can you help me?