These 3 tools can be used as examples by those who want to create basic game hacking trainer tools with graphical interfaces using AHK. I used classMemory.ahk to achieve it, a fabulous memory reading/writing wrapper (or library/class) written by fabulous RHCP, which is basically AutoHotkey's (better) response to AutoIt's NomadMemory.au3. The game in question has also recently turned free-to-play, so they can actually be tested by anyone.

DeadOrAutohotkey is a fighting game bot created to beat opponents in DOA5LR with no user interaction. It reads the memory of the game process every 2 milliseconds in order to understand what's happening, and then reacts by inputting the proper keyboard response according to what the opponent is doing. You can think of it like playing against a rock-paper-scissors robot which instantly recognizes what you do, and beats it.
Frame Counter is a tool used to display accurate frame counters. It retrieves various hidden internal game memory addresses not displayed within the regular in-game Move Details option.
Character Unlocker allows you to manipulate character selection through memory writing (like a CE trainer) and temporarily unlock any non-playable or locked character.

Other functions and approaches employed that some people may find useful:
- attempts to launch as admin (this check supports every OS, both compiled and non-compiled scripts) and throws an informative MsgBox in case of failure. It's contained at the top of the 3 main scripts
- contains various speed optimizations (settings.ahk) aimed to make the script's timing faster and more precise, the methods are explained in this other thread: https://autohotkey.com/boards/viewtopic.php?f=6&t=6413
- almost every Send command uses scan codes instead of "regular" keys (combos.ahk). This ensures universal compatibility with all keyboard language layouts, pretty important if you're going to distribute your tools globally. Just one example: a French keyboard has AZERTY, English has QWERTY, but the scan codes for A/Q are the same for both (Send {SC010}), here's a simple script made by SKAN to check them: http://www.autohotkey.com/board/topic/2 ... -of-a-key/
- ternary simultaneous SetTimer loops on a GUI that don't waste CPU cycles while OFF, used to simulate the "freeze value" function of Cheat Engine 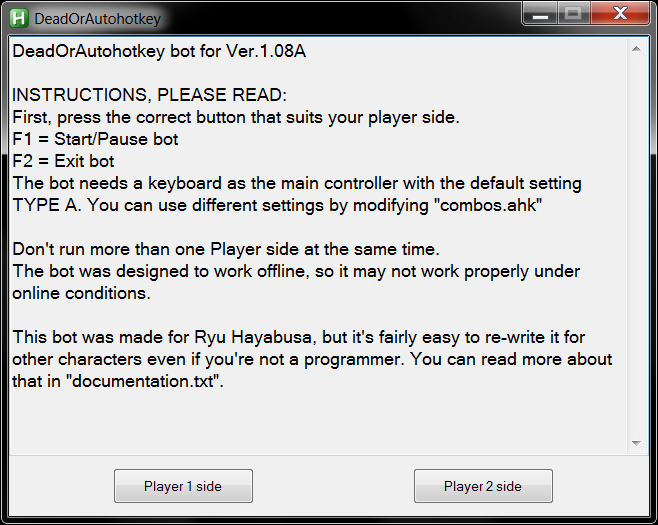 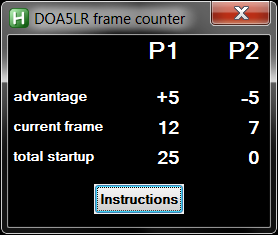 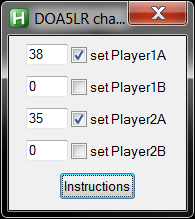 Re: DOA5LR ToolBox - trainers that write and read memory addresses

Re: DOA5LR ToolBox - trainers that write and read memory addresses

15/November/2016 - version 1.1
- (ALL TOOLS) added compatibility with the Ver.1.09 update
- (ALL TOOLS) code fixes: process priority reduced from High to AboveNormal, modified the admin rights checker code to be more automated, moved the game process variable to addresses.ahk and renamed it from "doa5lr" to the more generic "TargetProcess"
- (CHARACTER UNLOCKER) fixed the checkboxes to work properly

More details about the recent admin checker code written by lexikos can be found here https://autohotkey.com/boards/viewtopic ... &start=180
YOU'RE NOT ALEXANDER
Top
Post Reply
3 posts • Page 1 of 1

Users browsing this forum: No registered users and 10 guests